Wedding dresses – like marriage itself – are constantly evolving. For proof, look no further than the Museum of Applied Arts and Science’s latest major exhibition Love is … Australian Wedding Fashion currently on show at the Powerhouse Museum in Sydney from 13 May 2017 to 22 April 2018. And no contrast is more stark that the earliest known-surviving Australian wedding dress from 1822 and Jenny Bannister’s iconic python-skin statement from 1985.

That a dress from an otherwise-forgotten wedding almost 200 years ago has survived is no small feat, especially since the fabric itself

predates the dress by a generation.

The 1822 marriage between Ann Marsden and Reverend Thomas Hassall was held at Parramatta. According to Ann’s mother the dress was refashioned from her mother’s gown from 1793 and the original dress had faded from green to cream. Coloured gowns had been the norm until 1840 when Queen Victoria chose a white gown with lace for her wedding to Albert, beginning a tradition still observed around the world.

“As I loved leather clothes, I chose the most extreme form of skin available.

I had the aniseed patent python skins imported from Thailand by a vintage car upholsterer who worked in the music scene. I had ordered red for my bridesmaid, my sister Wendy, but it didn’t arrive. Luckily we had enough aniseed for both outfits. Wendy’s design was of one of my commercial boleros and backless mini dresses.

“My own dress was a couture piece. I needed a padded shoulder, long sleeves, backless neckline and a train. My assistant pinned the skins around me on the diagonal, this formed an asymmetrical train, and the snakeheads formed an organic lace trim around the backless edge and front neckline. I backed the skins with course black petticoat net which you can see under the train. The snake tails needed to splay out onto the ground.

“The skins just overlapped each other on the way down to the floor, which we stitched by machine. The sleeves were also attached using the same method.

“As I had been inventing art clothes since around 1977, my wedding dress was just another engineering feat, going beyond the norm, which is where I love to go.”

Glynis Jones, Curator of the exhibition speaks about this new major fashion exhibition she has put together for the Powerhouse Museum

How hard was it tracking down the first known wedding dress in Australia?

The Ann Marsden dress was part of the Museum’s extensive collection of fashion and dress as are most of the wedding outfits on display in Love is.

The Museum of Applied Arts and Sciences was established in 1879 under the rather austere title of the Technological, Industrial and Sanitary Museum. We have been collecting fashion and dress items since that time. With the establishment of a separate textile and costume department, and the appointment of a dedicated curator in 1980, greater focus was placed on this area of the collection and a specialised clothing and textile store was built to contain the growing collection. Recognising the importance of secure and well-designed storage, the Royal Australian Historical Society transferred their object collection to the Museum in 1981. This collection contained some very significant Australian costume including Ann Marsden’s wedding dress dating from 1822 which was part of a larger group of clothing associated with the family of Samuel and Elizabeth Marsden. 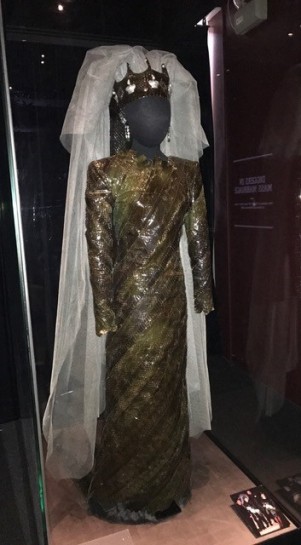 What were the criteria in selecting the dresses for this exhibition?

It was wonderful to bring these pieces out of the Museum’s clothing and textile store for this display, but this also meant difficult decisions had to be made about which outfits to select from our large bridal collection. An emphasis was placed on representing the diversity of wedding style across time. They are presented in a chronological format which allows us to reflect the changing styles and trends in wedding fashion while also exploring the context of the existing economic and social milieu that shaped marriage and wedding style.

What sort of fascinating accessories can people expect to see?

One of the earliest accessories is a beautiful circular cream silk satin bag trimmed with a drawing on card. It was owned by Agnes Thompson who wore it with her cotton organdie wedding dress when she married Dr George Busby in 1833. It was probably made by Agnes and may have come from a pattern in a contemporary women’s journal. George and Agnes were married by her brother at his cottage in the Bathurst district.

In the 1800s bonnets were a practical alternative to a wedding veil and we have a lovely example on display with a ruched cream satin crown trimmed with faux pearls and lace ties. It made by Mrs O’Meara’s Millinery Establishment in Inverell, NSW, in about 1875.

Much later in date is the sensational crystal and pearl crown designed and made by Sydney-based milliner Viktoria Novak. It was worn by Yellow Wiggle Emma Watkins-Gillespie’s with her Chantilly lace and organza Suzanne Harward designed wedding dress. Emma married Purple Wiggle Lachy Gillespie in 2016.

What have been the most unusual fabrications used in some of the dresses?

Australian fashion designer Jenny Bannister certainly has the most unusual. Best known for her experimental art clothes and fashion ranges, Jenny describes her wedding dress as an engineering feat. Made from patent python skins imported from Thailand, the dress was topped with a black crown and long silver veil

How were the dresses affected as a result of war and political change?

Norma Millard’s dress dating from 1943 is made from Irish lace panels sent from Ireland to Australia for an unknown bride. Considering the high casualty rates of World War II, it’s possible the original bride-to-be lost her sweetheart and donated the pieces to the Red Cross as a raffle prize. The winner sold the pieces to Norma Millard who had her seamstress assemble the pieces, retaining the original design with only minimal alteration to the sleeves and neckline. At a time when there were severe shortages of high fashion textiles Norma felt fortunate to find such a beautiful textile.

The silk satin and lace bustle dress was worn by Mary Cameron Murray when she married politician Sir Henry Parkes’ son, Varney in 1883. We also have on display the bridesmaid dress Mary’s sister, Isabella, wore to the wedding. Mary died from tuberculosis five months later, and shortly afterwards Varney proposed to Isabella. Marriage with a deceased wife’s sister had been prohibited in the British Empire since 1835. In the Australian colonies, with a smaller pool of eligible women, these marriages were gradually legalised in the late 1800s which allowed Varney to marry Isabella.

What cultural backgrounds can we expect to see?

I contacted the founder of Indian wedding planning and advice website The Crimson Bride who put me in touch with Indian Australian couple Sonia and Asis who had recently held their traditional Hindu wedding at the spectacular Chundar Palace in Udaipur. The wedding ran over three days with seven events and six outfit changes.  Sonia lent her dark red velvet Lehenga (long skirt) embroidered in gold thread and Asis his gold and cream Sherwani (long coat). The couple’s outfits were created by renowned Indian couturier Sabyasachi Mukherjee.

Since the 1940s, many Korean couples have moved away from traditional wedding styles, replacing them with Western customs and white wedding dresses. However, traditional wedding dresses are still worn for a special Paebaek (gift-offering ceremony held after the Western-style ceremony). We have borrowed men’s and women’s outfits from Lee Hae Sook Hanbok which is the only Australian based boutique designing, making and importing traditional Korean wedding styles.  This style of dress is usually hired rather than purchased.

Love is. . . Australian Wedding Fashion is open to till April 2018 at the Powerhouse Museum in Sydney.

About the Author, Phoebes Garland

Phoebes Garland is the Co-founder & Co-owner of Garland & Garland Fashion, a fashion & consultancy agency based in Sydney, and founder of Fashion Initiative.  Between the two of them, Phoebes & Robert Garland have over 60 years’ sales experience in fashion, publishing and advertising. Phoebes is an industry mentor to designers with Australian fashion industry body, Australian Fashion Chamber and is on the Advisory Board for Fashion Design Studio (TAFE NSW). Phoebes Garland is also an ambassador to Shake it up Australia Foundation and contributes articles to Australian Fashion industry magazine, Ragtrader.