Australian retail revenue and jobs are under serious threat due to the growth of online shopping from overseas retailers, fuelled by Australia’s lenient import tax regime.

David Mendels, managing director of wholesaler International Fashion Group, confirmed the gravity of the issue, which has gained the attention of mainstream media, in a recent open letter to retailers in which he outlined “the biggest concern to our business since the dismantling of quotas in Australia,” urging retailers to lobby government and industry associations.

“For a number of years, overseas online retail shops, particularly from the US, have been a growing problem for our wholesale and retail markets. The consumer in Australia is able to purchase up to A$1000 from overseas, duty and GST free, a saving of approximately 20 per cent, and benefit from  not having to pay on shipment taxes from the country of purchase, which can add a further 10 per cent of savings,” Mendels stated.

The problem was further compounded by the strength of the Australian dollar against the US dollar, meaning consumers were spending in overseas markets on comparatively cheap goods, forcing department stores and boutiques into “continually cutting prices in order to survive.”

Australia’s import tax loophole is understood to be a hangover from the years before the computerisation of the Customs Department, when a $1000 threshold was put in place on dutiable or taxable imports to speed up customs paperwork.

“However it has now come to pass that the Australian consumer can now purchase goods from say the US and other countries at a distinct advantage,” Mendels said, adding UK retailer Top Shop counted Australia as its third biggest online market outside the UK and US.

In Germany a flat 50 per cent tax on all online retail outside the EU has been introduced, while in the US 22 per cent duty on top of various state taxes applies and in the UK 12 per cent plus 20 per cent VAT applies. 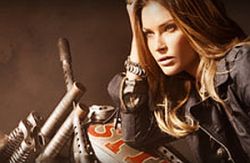 “If all of these countries can protect their citizens’ businesses, why can’t ours?”

Retailers spoken to by Fashion Exposed Online confirmed the reality of the problem, with one Sydney boutique owner, who declined to be named, confirming she stopped stocking True Religion jeans (pictured right) when it became clear customers were visiting her store solely to try product before purchasing it online from the US.

Russell Zimmerman, executive director of peak industry body The Australian Retailers Association (ARA), said the ARA took the issue “very seriously” and planned to conduct comprehensive member and consumer surveys before taking appropriate action. “It’s clear that this is a problem that has really escalated in recent times, and the ramifications are huge,” he said. Zimmerman also cited research from consultancy Frost & Sullivan predicting around $12 billion would have been spent by Australian consumers on online purchases during 2010, with around half of that from overseas based retailers.

“If we’re talking about around $6 billion, that indicates hundreds of thousands of jobs in the retail sector are being jeopardised.”

A spokesperson for Assistant Treasurer, Bill Shorten, said the Board of Taxation had found it was not “administratively feasible” to apply GST to goods worth less than $1,000 imported from overseas.

“However, the Gillard Labor Government understands the concerns of retailers and other stakeholders about this issue, particularly in light of the high Australian dollar. It deserves serious examination and, while the threshold is good for consumers, we need to balance that against the interests of retailers and the administrative burden on businesses.”